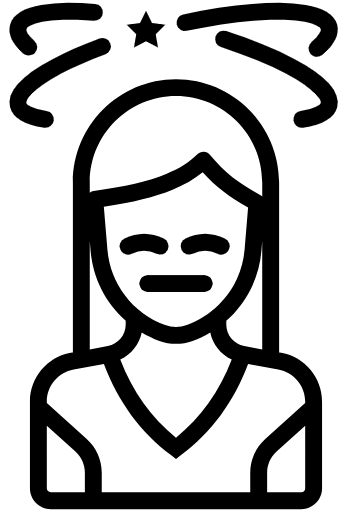 Vertigo is the sudden sensation that you’re spinning in the room.  While there are several causes, the most common is benign paroxysmal positional vertigo (BPPV). BPPV causes brief episodes of mild to intense dizziness that can come and go and commonly last less than a minute. It is usually triggered by specific changes in your head’s position. This might occur when you tip your head up or down, when you lie down, or when you turn over or sit up in bed.

Besides a sense that you or your surroundings are spinning or moving (vertigo), BPPV can also cause loss of balance or unsteadiness, nausea, and/or vomiting.

Often, there’s no known cause for BPPV.  When there is a known cause, BPPV is often associated with a minor to a severe blow to your head.  Less common causes of BPPV include disorders that damage your inner ear or, rarely, the damage that occurs during ear surgery or long periods positioned on your back, such as in a dentist chair. BPPV also has been associated with migraines.

So, what happens?  A crystal that’s usually firmly attached inside your inner ear can get dislodged, and while floating around, move the fine hairlike sensors that tell your brain where your head is in space.  Your brain is told that you are moving, even though you aren’t.

Luckily, there is an exercise that helps to move that crystal to a place in your ear that doesn’t have those sensors.  It’s fairly easy [though can be disturbing to do, since you deliberately put yourself into positions that cause vertigo], and IF this is the cause of your dizziness, very effective.

Many of my patients choose to come in and let me guide them through the exercise, called Epley’s maneuver.

Here are the steps:

Repeat the exercise until you either can’t stand it any more of the dizziness is totally gone.  In our office, we seldom ask you to do the exercise more than three times, as it can be very uncomfortable.  You can do this exercise at home three times a day until you have had no symptoms for 24 hours.

NOTE:  Once you’ve had this, you are likely to get it again.  Putting off treatment just means more days of misery.  I have patients who are prone to this problem, who do the exercise once a week routinely so that they never have to deal with dizziness again.  Others wait until the vertigo returns and do the exercise enough to resolve the current issue.

Font Resize
Contrast
Accessibility by WAH
Call Us Text Us